The GCF’s Rainbow Rhino Initiative has 3 tactical approaches to contribute to this epidemic. Firstly, the foundation has established a counter poaching training camp which sponsors courses focusing on tracking, crime scene investigation and drone surveillance. Second, the initiative is developing a core breeding population of rhino from which a custodianship program can be launched, distributing new founder populations of rhino throughout Africa together with trained anti-poaching units. Third, the GCF is partnering with technology companies to create interactive awareness of rhino relocations through the latest GPS and drone technology allowing international communities to follow real time movement and imagery of individual rhino. The foundation has also played an integral role facilitating all key anti-poaching role players in the region including SAPS, Cape Nature, State Vets, Game Rangers Association of Africa, and the private sector to coordinate rhino poaching crime scene roles and responsibilities.

Last year funds raised helped to complete the anti-poaching training facility on the 11,000 hectare, Big 5 reserve as well as purchase a rhino cow and calf to add to the core breeding population. The funds raised this year would go to securing vital training equipment needed, including night vision glasses, safety equipment, lecturing equipment as well as subsidizing multiple training courses over the next 12 months. 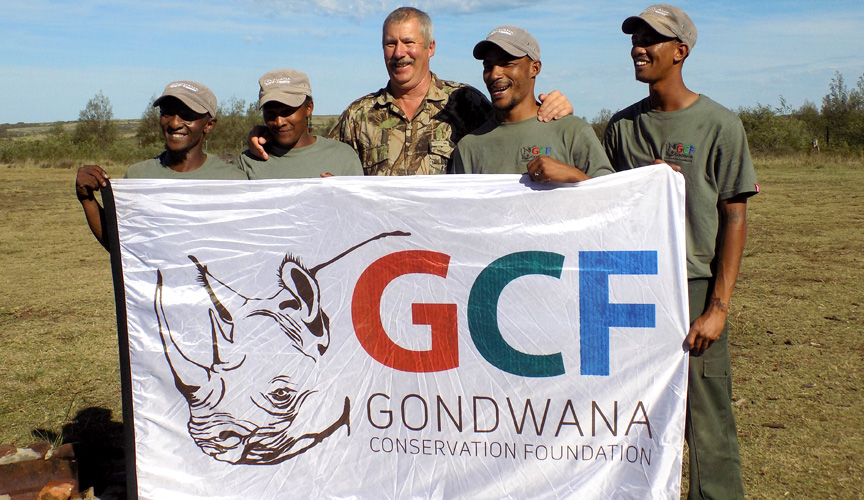 GCF is calling on all corporates and individuals with a passion for conservation and an interest in saving our rhino to please donate.

You can also make a donation via EFT

Please also send an email notifying us of your contribution with name/organisation to marketing@gondwanagr.co.za