We aim to increase populations of this endangered species

Historically, Cape mountain zebra occurred extensively in the mountainous regions of the southern parts of South Africa, however, excessive hunting and habitat loss to agriculture left Cape mountain zebra numbers in a critical status by the 1950’s, with fewer than 80 individuals remaining in only three relic populations. Today they are once again distributed throughout much of their original range, but the population is fragmented into small sub-populations which have become isolated.

The successful growth of the Cape Mountain Zebra population is attributable to two key factors, namely (1) the meta-population approach to the management of the sub-species and (2) the increase in available habitat. Gondwana recognised the need to protect the species from further decline and aims to promote the growth of the population by means of these two key factors.

The  Cape Mountain Zebra Project aims to encourage the population growth of the endangered species and ultimately distributing surplus Cape Mountain Zebra to other protected areas . Monitoring of the zebra herds on Gondwana is crucial in the management of the species. Monitoring is done by the identification of individuals and the build-up of a database for these valuable species. This is done, in a sense, through a process of elimination. During any time period or activity spent within the protected area an encounter with any of the Cape Mountain Zebra is recorded through means of photographs of the encountered individual(s).

Each Zebra has a distinct pattern and no two zebra are identical, this forms the baseline for the identification of an individual. Each photograph is taken from a side on view of an individual, either the right- or left side, but preferably both. The most important factor to look at is the stripe pattern found on the shoulder blade of each zebra. By comparing this pattern with previous photographs or with future photographs it is possible to identify individual zebras that occur within the protected area. Other aspects for possible identification can also be noted from the side-on photographs, i.e. a shortened tail or a clearly distinct stripe pattern for example.

In time, it is possible to build up a Field Guide Identification Kit for all individuals. Within these field guides would be recorded the key points and patterns to look for, from both the right and left side, in order to identify specific individuals or harems. To date, twelve individuals have been identified either by their right side shoulder pattern or left side shoulder pattern. Further included in these guides would also be any information of note, such as the gender of the individual, date of birth (in terms of new foals born on the reserve), genetics (which individuals make up the parents). 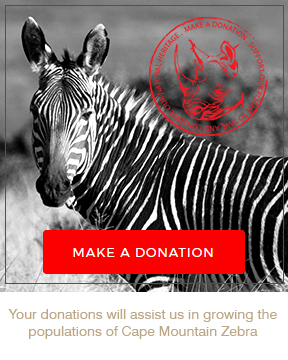